Raising awareness to eliminate trachoma by 2025, one blink at a time.

‘Blink’ at the Oxo Gallery, London, uses a series of digital images from leading photographers to help demonstrate how the disease trachoma erodes vision to blindness as eyelashes turn inwards, gradually scratching away at the surface of the eye. The charity Sightsavers aims to eliminate the disease by 2025. Sightsavers selected five award-winning photographers and chose work with a brief to show what each would want to see before going blind. The exhibition revealed work from award winning photographers including Nick Knight, the late David Goldblatt, Kate Holt, Georgina Cranston and Tommy Trenchard.

MET began working with Sightsavers in 2018 as part of a creative workshop and for the Blink exhibition used the concept of diminishing sight, with strong graphics showing split shadows and dynamic lines, which led visitors through the space and amongst the artworks. MET Studio’s role was to develop the visitor experience, generating the idea to digitally hack the gallery space and to drive the overall visual narrative of trachoma, in that sufferers eventually blink themselves blind.

To give visitors an artistic interpretation of the devastating results of trachoma, an interactive interface developed by Jason Bruges Studio, used a tracking camera to capture the blink of each visitor, which in turn destroyed the digital images pixel by pixel, until each photograph no longer existed. 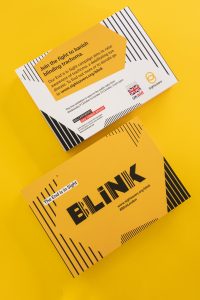 MET ID created an impactful, yellow ‘Blink’ logo, drawing attention to the exhibition with application on local signage and along Waterloo Bridge, with moving signage showing fonts that reduce with each new advert, also alluding to the gradual process of trachoma. Within the gallery spaces, a bold graphic look and feel was designed and applied that expanded the notion of diminishing sight. Using the Sightsavers brand identity, MET ID were able to bring to life the gallery space and elevate the exhibition message that the end was in sight for trachoma.